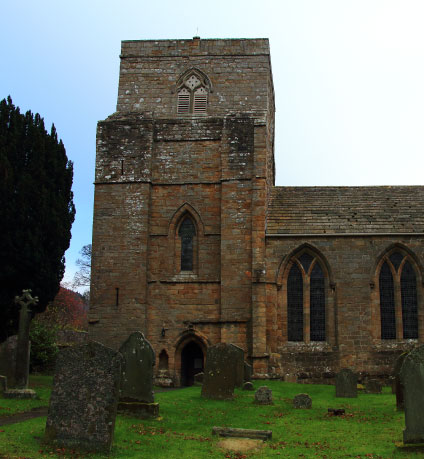 Blanchland Abbey - a parish church and much more

Blanchland Abbey, as the parish church of St Mary the Virgin is still known, is a place of tranquillity and prayer, which is used regularly for worship and special occasions. The Abbey is part of the Moorland Group of Parishes which unites eight churches in the Tyne and Derwent Valleys, in the Diocese of Newcastle.

A unique place of worship

As soon as you walk through the door, you know that Blanchland Abbey has had a turbulent and unusual history, as its layout is unexpected. This is because, uniquely, the present building was created in the 18th century from the ruins of the medieval Premonstratensian monastic church. The early 13th century north transept and the chancel (the left ‘arm’ and top of the original, cross-shaped church) were restored to make the unusual place of worship you see today. Remains of the medieval nave, including a blocked window, can be seen outside in the wall that separates the churchyard from the garden of the Lord Crewe Arms hotel next door. 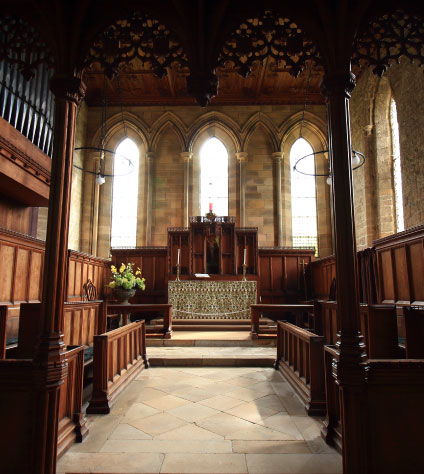 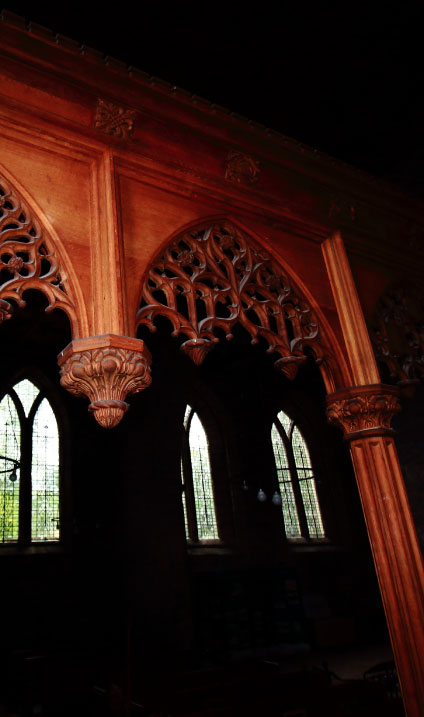 Six fine medieval grave slabs can be seen in the Transept floor. Two have abbot’s croziers, two have the emblem of hunters or foresters. 15th century records reveal that the canons of Blanchland Abbey kept a pack of hounds and enjoyed hunting but were firmly told by their bishop to stop these forbidden pursuits.The richly carved chancel ceiling dates from the late nineteenth-century and the remainder of the extensive woodwork from the early 20th century.With no central heating, current services are held in the relatively snug security of the enclosed 19th century Gabriel Chapel in the north transept. Above the chapel are curious blocked-up 18th century windows, which date from a time when the village school was held on a first floor of the church, perhaps once reached by a rickety wooden staircase.Many people when they enter the church fall silent, but the acoustic is remarkable. One theory is that acoustic channels were dug under the floor to enable the singing of the small group of canons to fill the great abbey church. 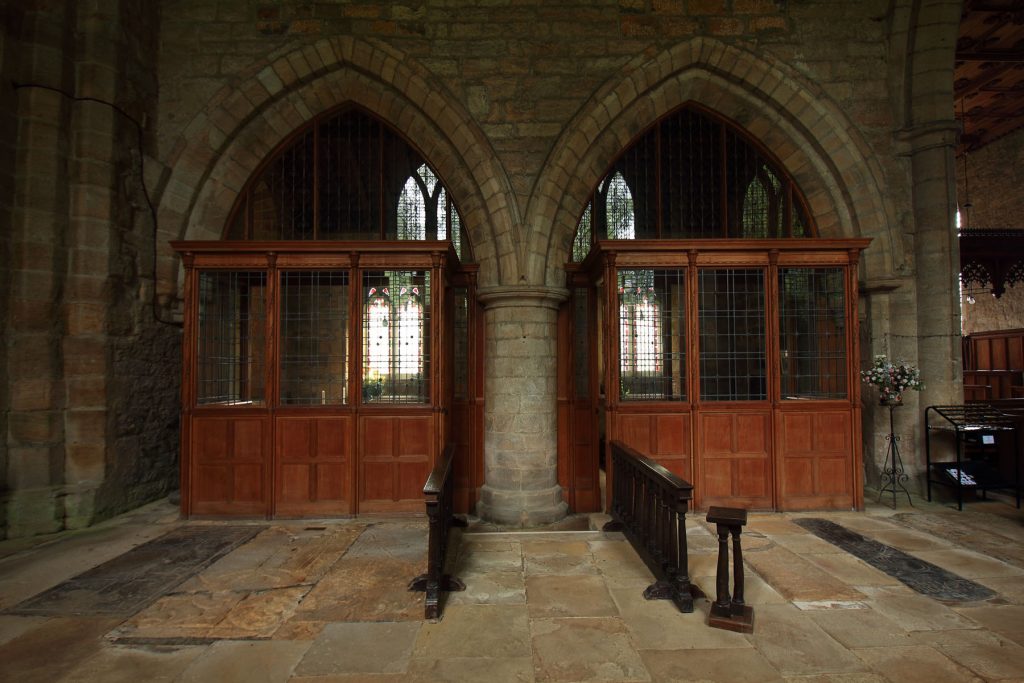 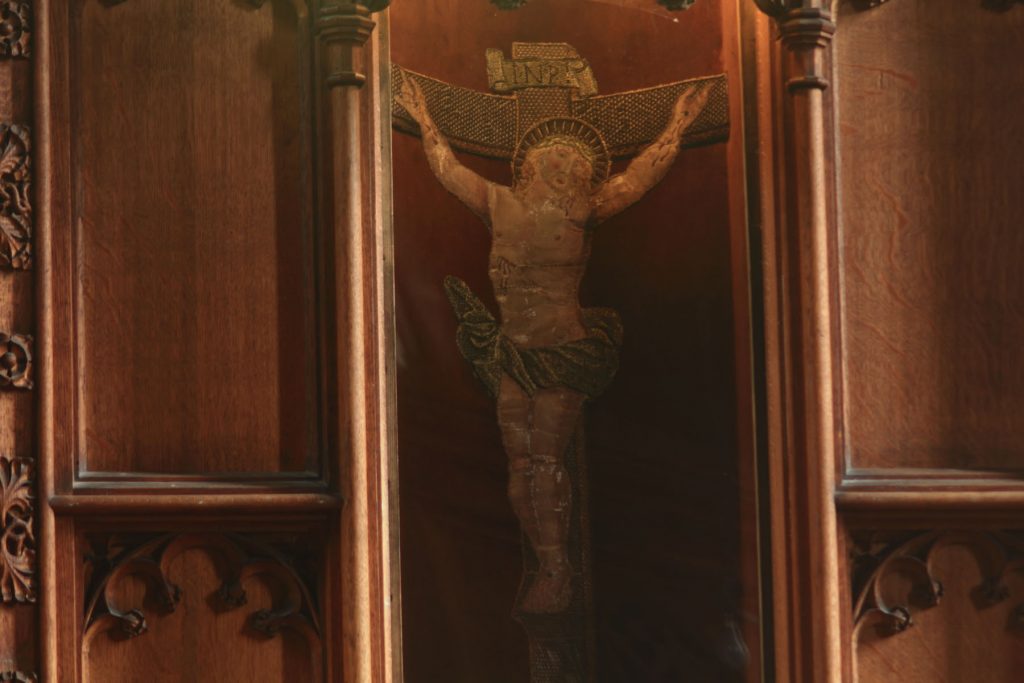 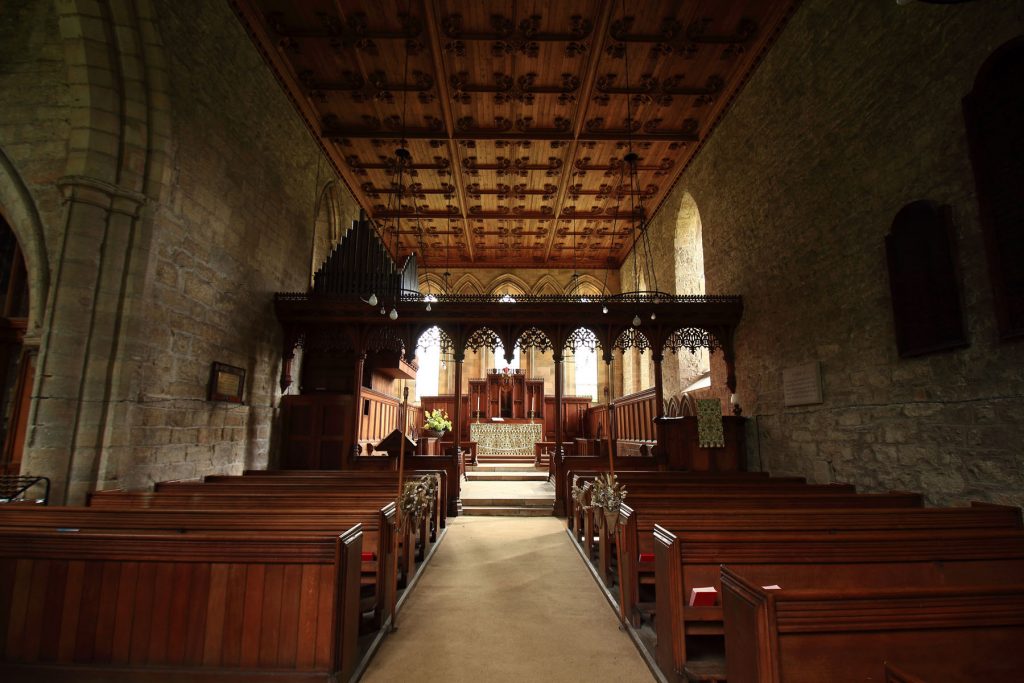 Although plainly glazed, the windows of Blanchland Abbey are intriguing. Fragments of coloured medieval glass do survive, placed high in the east window, though these will soon be moved to a place of greater security. Another, which has already been conserved, is an early 15th century panel of a monk, clad in his fringed white woollen cloak, who looks almost too fragile and young for his calling.The lovely plain lancet windows, set in the north and south wall of the Chancel, show the earliest-known use of zinc alloy in church windows in Britain, as the framework to hold the glass. The work was done in 1852 and It is likely that the frames buckled soon after they were installed, before stabilising.The understated glass designs of the west windows are some of the finest work of the renowned 20th century Northumbrian glass artist Leonard Evetts (1909-1997). 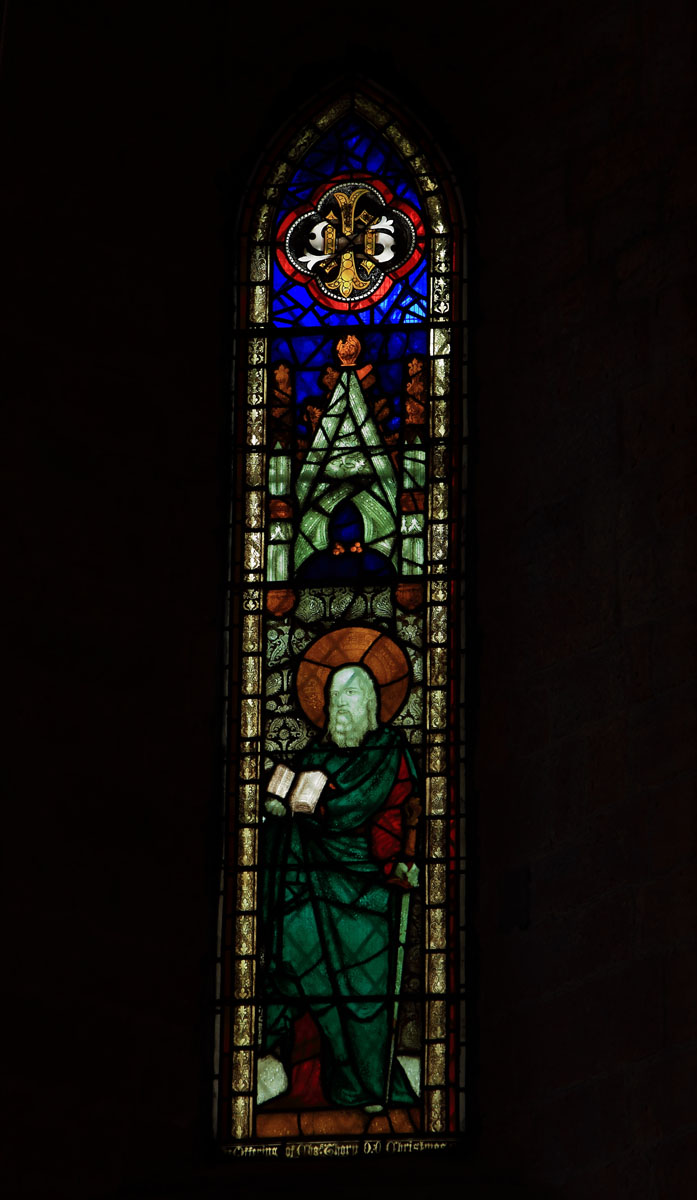 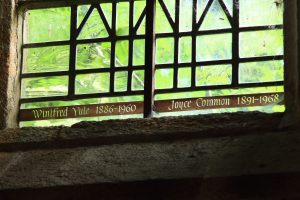 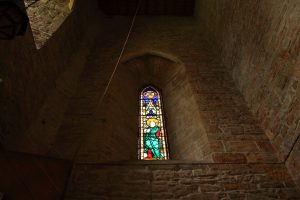 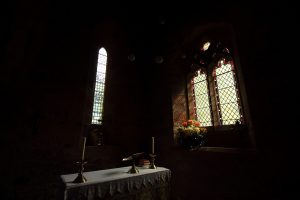 Find out more about the 2019 Blanchland Abbey Project, to create a sustainable and exciting future for the church. 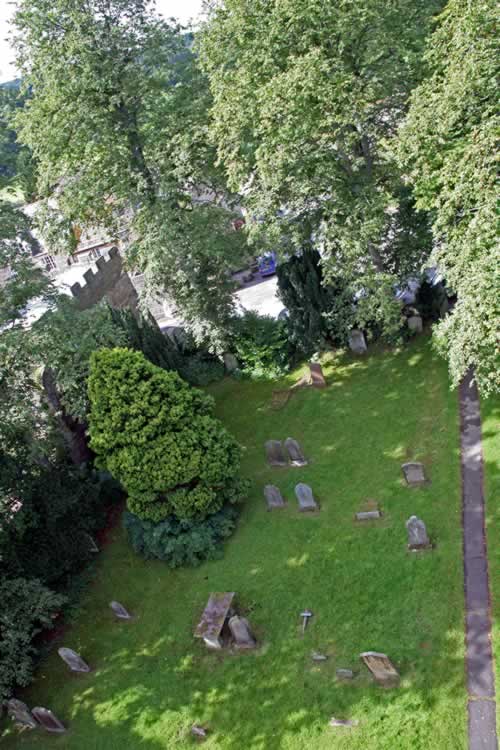 Outside the church on the left of the path as you walk towards the abbey is 13th century cross, although the majority of the gravestones date from the 17th, 18th and 19th centuries. They record the names of many long-standing Blanchland families, a lady who lived to the grand old age of 105, as well as the details of tragic lead-mining accidents and one unsolved murder! 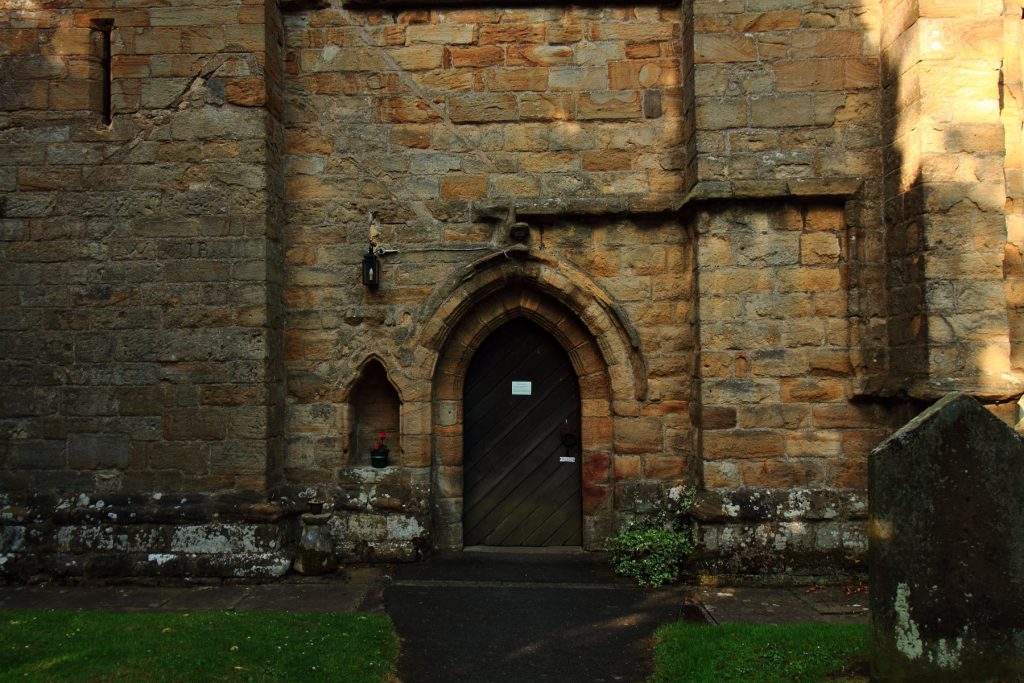 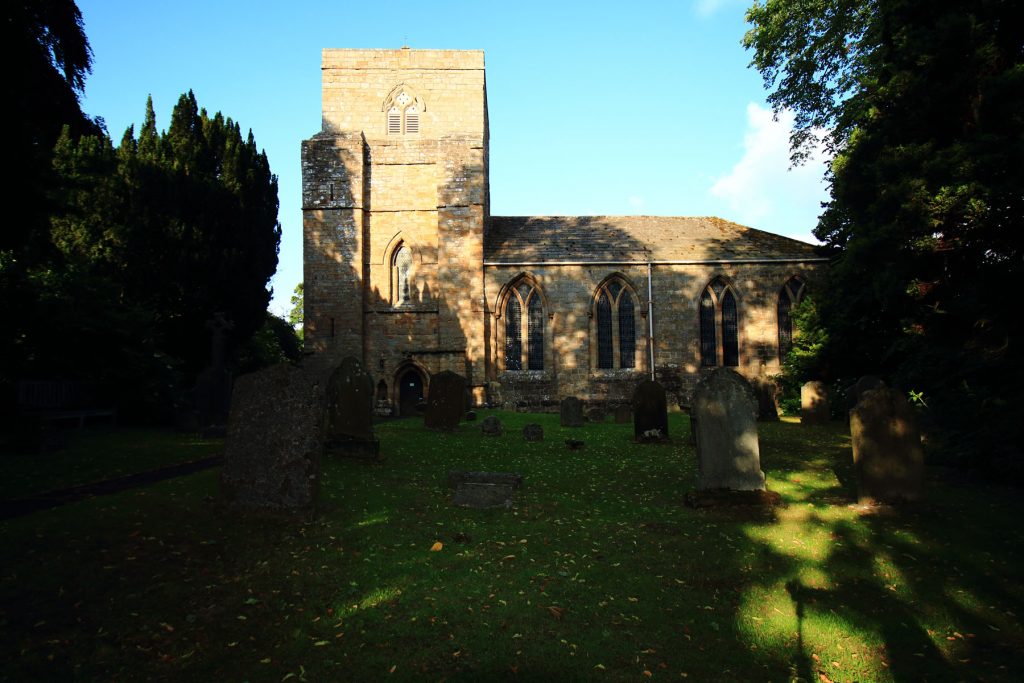 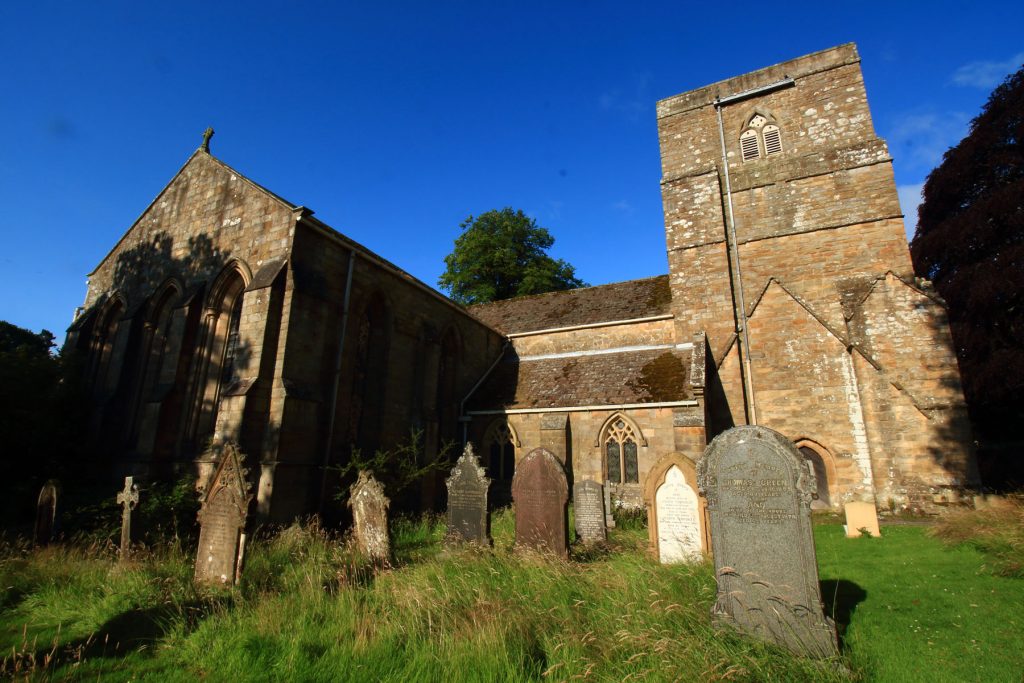